Child’s Play: It Ain’t What it Used to Be 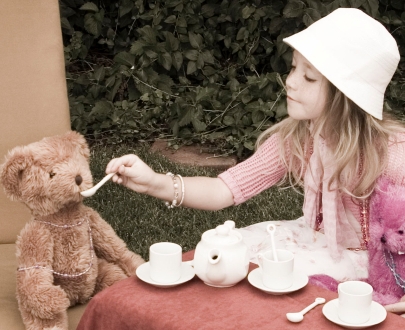 While adults like to reminisce about romping outside with the neighbourhood kids, making up their own games from sunrise to sundown, this isn't the reality today. A 2010 study[1] found children age to 8 to 18 spent nearly 8 hours a day using or consuming media (including smart phones, TVs, DVDs, videos, video games, computers, movies, music and print) for non-school uses.

Given that there are only so many hours in a day, it’s very likely that these more passive forms of entertainment are squeezing out “make believe” play.  Make believe play, also called pretend, free or imaginative play, is defined as “the acting out of stories which involve multiple perspectives and the playful manipulation of ideas and emotions"[2].

The End of Pretend?

Psychologist David Elkind attributes the decline in make believe play to “a perfect storm of technological innovation, rapid social change, and economic globalization."[3] He notes the powerful allure of increasingly powerful tech devices, from video games to computers and big-screen TVs. He also says it’s become more convenient for today’s time-strapped single and working parents to outsource aspects of parenting to everyone from sports coaches to tutors—especially when they are insecure about their offspring’s place in the competitive global economy.

Less make believe play is a concern, since imaginative play helps children learn about social interaction and friendships[4], and develops their self-regulation skills “including reduced aggression, delay of gratification, civility, and empathy."[5] Play also might be a great (and inexpensive) way to develop little Mozart’s creative streak: it's been shown to improve flexible thinking and creativity[6] and is associated with increased creative performance[7] later in life.

"A national survey by the Kaiser Family Foundation found that with technology allowing nearly 24-hour media access as children and teens go about their daily lives, the amount of time young people spend with entertainment media has risen dramatically, especially among minority youth."

"Systematic research has increasingly demonstrated a series of clear benefits of children’s engagement in pretend games from the ages of about two and one half through ages six or seven."

"When children use toys to  introduce possible scenarios or friends, the representation of multiple perspectives occurs naturally. Taking on different roles allows children the unique opportunity to learn social skills such as communication, problem solving, and empathy."

SEE Play in child development and psychotherapy and Imagination and play in the electronic age.