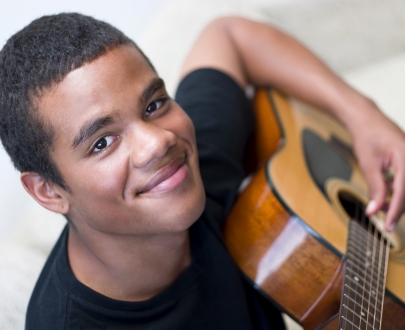 Our 100 billion neurons get fired up when we experience an important event or repeat something often enough to signal our brains to “remember this!” The more these neurons fire, the stronger the connection that is made and, over time, the connection becomes permanently established. The result is, in fact, that the brain literally gets shaped by our experiences.

Music has long been considered an activity that promotes healthy brain development and function. Becoming more established in the literature, musical experiences are felt to:

How can music training be a mechanism for improving social skills? Within the last decade, social and biological researchers have discovered a specific link between music and emotional sensitivity which may go a long way to explain the social and emotional development connection.

In one study[4], adult participants completed two tests.  The first was a standardized emotional intelligence test in which they responded in writing about the emotions involved in hypothetical, everyday scenarios. The second test required the participants to listen to classical piano music and attempt to identify the emotions that the music intended to evoke. Interestingly, when the results of the two tests were analyzed, the researchers found that emotional intelligence and emotional recognition in music were significantly correlated. This finding suggests that the ability to identify, understand, reason and manage emotions in life use the same types of mechanisms as being sensitive to emotions in music.

Another study[5], in the field of neurobiology, used brain scans to examine the biological response to emotionally laden sounds. In this case, the experimental subjects listened to infant crying sounds. Their brain responses to the cries were cross referenced with the amount of musical experience each participant had (the type of musical training and at what age they first began musical training). It was discovered that those with musical experience demonstrated enhanced perception of emotions. The strongest results, in fact, were with those people who initiated musical training before the age of 7.

These corroborate findings from a study[6] that followed two groups of 8-11 year olds - some of whom participated in a year-long music program and others made up a control group. At the beginning and end of the school year, empathy levels of students were measured using three different techniques; matching faces to emotions, memory of emotions from video clips and a self reported questionnaire. While results were not overwhelming, it was found that there was a substantial increase in empathy scores after the year-long music program and overall results were higher in the music group compared to the control group.

There are many ways to introduce music into a child’s life. Singing and making rhythms in the early years are first steps in building a musical foundation. As children age, finding or creating opportunities to play an instrument or sing in a choir will continue to fire up those neurons resulting in both music appreciation and the added benefit of positive social and emotional brain sculpting.

As Nina Kraus and Bharath Chandrasekaran write in the abstract of their article in Nature Reviews Neuroscience, "music is a resource that tones the brain for auditory fitness." Their paper draws upon neuroscientific evidence that music influences the auditory system for musicians which, in turn, effects the ability to listen in non-musical situations.

This study followed 217 high school students in an urban area of the United States. The researchers examined the relationship between academic achievement and a variety of risk and protective factors including attendance, academic self-efficacy, academic expectations, grade retention, music instruction and school behaviours.

Written by Susan Hallam of the University of London, The power of music: Its impact on the intellectual, social and personal development of children and young people, reviews the emperical evidence related to the effects of an active engagement in music. The review specifically examines the following areas:

This study explored the connection between the recognition of emotions in a musical performance and emotional intelligence.

In this study published in the Psychology of Music (2013), researchers Rabinowitch, Cross and Burnard looked at "empathy promoting musical components" (EPMC) and hypothesized that repeated exposure to these EPMC's would increase empathy in non-musical contexts. These components include:

"Music as a powerful medium for social interaction."